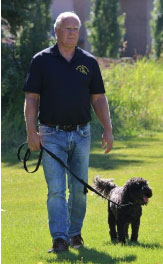 There are four basic consequences that make up operant conditioning with a fifth less used procedure known as “extinction”.

POSITIVE REINFORCEMENT – (Reinforcement): occurs when a behavior (response) is followed by a stimulus that is desirable or rewarding, increasing the frequency of that behavior. Example, you tell your dog to sit and he does and you lavish him with verbal and physical praise.

NEGATIVE REINFORCEMENT – (Escape): occurs when a behavior (response) is followed by the removal of an distasteful stimulus, thereby increasing that behaviors frequency. Example – your dog is whining in his crate and you create a loud noise by smacking the crate with your hand. The dog stops whining and the noise immediately goes away.

POSITIVE PUNISHMENT – (Punishment) (also called punishment by contingent stimulation): occurs when a behavior (response) is followed by a stimulus, such as introducing a loud noise or leash pop, resulting in a decrease in that behavior.

NEGATIVE PUNISHMENT – (Penalty) (also called punishment by contingent withdrawal): occurs when a behavior (response) is followed by the removal of a stimulus, such as taking away a dogs bone following an undesirable behavior, resulting in a decrease in that behavior.

EXTINCTION – is the lack of any consequence following a behavior. When a behavior produces neither favorable nor unfavorable consequences this behavior will in all likelihood occur less frequently over time. Example; I will often utilize extinction when I first encounter a potentially aggressive dog. If this dog attempts to make eye contact with me I will not allow our eyes to meet but instead will casually look elsewhere and pretend to ignore the dog providing neither a positive or negative response to the dog seeking eye contact.

Being a first time dog owner I knew I wanted professional training not only because...