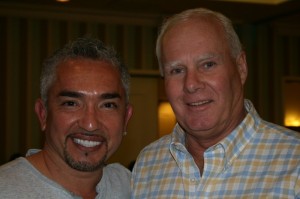 Before I get started on what I am going to write I ask that you read the whole blog before jumping to conclusions. I know that “The Dog Whisperer” has millions of followers. I am also one who watches him on TV when I have time to do so. Cesar understands dogs, plain and simple. I am a proud member of the IACP (International Association of Canine Professionals) and recently attended a seminar in San Diego Ca. where I consider myself fortunate to be one of the many professionals who were able to meet Cesar Milan, hear him speak and spend the better part of a day in his presence. He is a great and respected canine professional for sure.

Now, without taking anything away from Cesar I am going to suggest that this same person’s popularity is unknowingly and unintentionally contributing to a rapidly increasing number of very poorly behaved dogs and in some cases even dangerous dogs.

No, this is not The Dog Whisperer doing this at all. What I believe it is though is that far too many people will watch Cesar work his magic with dogs on TV and then think they can do the same. Believe me there are not many people with Cesar’s natural ability in the world. I will count myself as one of them. No, I am not being arrogant or big-headed in any way. Often people will say that I am just like Cesar. My response is always, “no, I am not at all like Cesar, Cesar is a lot like me”. I was working with dogs almost two decades before Cesar first appeared on the TV screen. It just so happens that Cesar’s philosophy and natural ability (note “natural ability”) and mine are very similar.

What I am saying here is this; Cesar has the ability to rehabilitate dogs that few others would even attempt to work with. By watching his show on TV, buying his books and DVD’s, far too many people believe they can replicate what Cesar does. The truth is that very few people in the world can replicate what Cesar does on or off TV. What happens though because people see Cesar’s results on the TV and have bought his material they falsely believe they can replicate his results. They believe this so much so that they will keep trying to rehab or reshape a dog’s behaviour until the dog is one to two years old and finally the well intended owner surrenders and calls a professional trainer or re-homes the dog. In ever increasing instances by this time the dog has full blown dog aggression and often even aggression towards humans. I am not suggesting this is anyone’s “fault”. Not the dog owners or Cesar’s. I am saying though is that I am seeing more and more of these cases every year. In almost all of the severe cases I have been called into over the past couple of years, the dogs’ owners have told me that they watch” The Dog Whisperer”, have his books and DVD’s but just can’t get their dog to respond like Cesar does. Cesar has a gift. Cesar has “balanced energy”. Cesar, as great as he is with dogs cannot teach you ow to have his “energy”. I would hazard to guess that if you asked Cesar he would tell you as well that he cannot teach you how to generate positive and balanced energy over the TV or by way of his books. In person I am sure Cesar would teach you so much however most people will not be so fortunate as to work directly under Cesar’s supervision and guidance. My customers tell me that I am the next best thing.

With Larry's skill and patience, he took our loud, hyper, and non-obedient Miniature Schnauzer, and...

Heather and Dan A